﻿
You are here: Home / Meet the Dancers / Alan Huerta 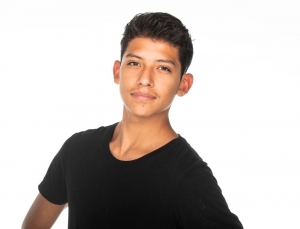 Alan Huerta, from Mexico City, started dancing at age of 13 at Ema Pulido Dance Studio and later on at the age of 15 he moved to Cordoba Veracruz to pursue a professional career at Fomento Artistico Cordobes (PROVER). He competed at the YAGP Semi-Finals México where he got a scholarship to Orlando Ballet School’s Summer Intensive in 2017. He went to the YAGP Final in NYC and performed “Bohemian Rhapsody” choreographed by Josue Rebollo. He also performed in 2018 at the “Stars of Today Meet the Stars of Tomorrow.” In the same year, he attended the summer intensive at Orlando Ballet and was offered to join Orlando Ballet’s Second Company where he attended for 2 years. During his time there he performed in Robert Hill’s Bolero, Arcadian Broad’s Wonderland, Robert Hill’s Requiem, Victoria Morgan’s Cinderella and had the opportunity to understudy Val Caniporeli’s Lambarena. Alan Huerta was also awarded a scholarship to the Ballet and Contemporary Program at Jacob’s Pillow for the summer of 2019 and performed in the inside out stage with choreography by Matthew Neenan.

GET TO KNOW ALAN