﻿
You are here: Home / Meet the Dancers / Eric Stith 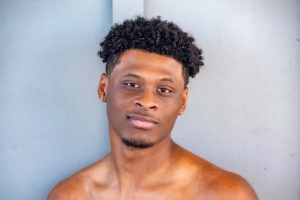 Eric Conrad Stith III was born in Virginia Beach, Virginia. Eric started training at the age of 7 at The Old Donations Center for the Gifted and Talented. He trained at The Governor’s School for the Arts for 4 years and also danced with Elevate Performing Arts Center for 3 years. While at The Governor’s School, he performed in works by Paul Taylor, Erick Hawkins, and original and staged works choreographed by teachers at The Governor’s School. Eric danced the role of Johnny in Paul Taylor’s Company B and Lucien in The Governor’s School production of Paquita. He played a major role in Richard Alston’s piece Arrived that was part of the film Dancing on the Shoulders of Giants in 2019 with WHRO. Eric has studied at three summer Intensives: Orlando Ballet School, The School of American Ballet, and Charlotte Ballet Summer Intensive. In Charlotte, Eric has done work with the community, such as performances with Elevation Church. He taught ballet at El Alma de la Luna Dance Academy. At Charlotte Ballet, he performed Donizetti Variations, choreographed by George Balanchine, staged by Patricia McBride, and contemporary work choreographed by Chris Stuart.

GET TO KNOW ERIC