﻿
You are here: Home / Meet the Dancers / Tyler Diggs 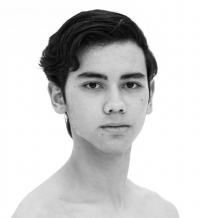 Tyler, raised in the suburbs of Philadelphia, began his ballet training at age 7 at the Metropolitan Ballet Academy under the direction of Lisa Collins Vidnovic. With the help of their Boys’ Scholarship Program, Tyler studied classical ballet, as well as contemporary and modern dance, for almost 9 years, getting opportunities to perform in works created by Kanji Segawa, Tommie Waheed-Evans, Ashley Walton, Kate Skarpetowska, and Sarah Mettin. He also got the opportunity to compete in Youth America Grand Prix for four years under the coaching of Natalya Zeiger before receiving a scholarship in the NYC Finals to attend The HARID Conservatory in Boca Raton, FL in 2017. Tyler attended HARID for his junior and senior year, receiving instruction from faculty members Alexey Kulpin and Meelis Pakri and performing in The Nutcracker, Swan Lake, and Raymonda. After graduating from HARID in 2019, Tyler attended The Joffrey Academy of Dance’s Trainee Program on full scholarship for one year under the leadership of Raymond Rodriguez and, later, José Carayol. There, he got to perform in George Balanchine’s Who Cares?, staged by Deborah Wingert, and had the opportunity to work with choreographers Yoshihisa Arai, Tsai-Hsi Hung, Chanel DaSilva, Durante Verzola, and Pablo Sanchez to create brand new ensemble works, before receiving an offer to join Charlotte Ballet II in 2020.

GET TO KNOW TYLER